The introduction of more and more complex standards makes it nearly impossible for fabricators to determine profiles and glass panes during the estimation which shall later fulfil the conditions of a structural analysis.

It is possible that a low-priced profile or glass is structurally insufficient whereas a structural safe section is no longer profitable. Where shall fabricators get this important information from?

On the one hand you should better ask a structural engineer prior to submittal of quotation to make a reliable statement about the designated sections, on the other hand you usually prefer saving these costs as long as the order isn’t placed with you.

Like other program modules the statics module applies common situations in practice. For the structural evaluation of special constructions it is still essential to consult an expert.

In the following it is described which preconditions form the basis of the structural analysis in LogiKal®. These remarks are partly rather trivial but they may also mark an important basis for decision whether the procedure of LogiKal® is allowed to be applied reasonably in a particular case or not.

The program is capable of calculating single and multi-span-beams according to first order theory. Thereby the degree of statical indeterminacy plays no role.

Solely vertical elements under mainly horizontal loads (wind) are considered. Thus it is impossible to calculate roof elements by this module.

Mullions and transoms are calculated as single-span-beams in door and window elements whereas in curtain wall mullions the number of spans and their span-width are unrestricted.

It is postulated that profile or mullion splices produce a rigid connection, i.e. a pin connection or a rotation spring stiffness is neglected. Therefore you must check carefully whether the applied splice type fulfils these requirements or not. If not it is still safe to move the splice to the position where the moment diagram shows zero.

The decisive distributed load according to the requirements of the design load standard results from on the load cases wind pressure and wind suction. In order to convert load per unit area into load per unit length the program applies load distribution areas.

All multi-span-beams strictly apply rectangular load distribution areas. Picture 2a shows a curtain wall with a distributed load acting evenly over height and width. In this particular case the load per unit length A on beam 1 results from multiplying the distributed load by half of the distance to the next beam: Within span 1.1 the factor amounts to B1/2, within span 1.2 to B1/2 and within span 1.3 to (B1+B2)/2.

For beam 2 and load per unit length B it is necessary to consider the load distribution areas left and right of the beam: Span 2.1 and 2.2 own the same factor which is (B1+B2)/2.

Beam 3 represents a special case. The support between span 3.2 and 3.3 isn’t set at the same height as the transom connection is. In order to avoid different constant distributed loads within span 3.2 the program assumes that the largest load distribution area is applied for the whole span. Thus it results in the following factors: span 3.1 (B2+B3)/2, span 3.2  and span 3.3 (B1+B2+B3+B4)/2 each.

When calculating a beam’s load it is assumed that all loads per unit length are evenly distributed over the span, i.e. a load saltus is only possible at a support’s position and not between two supports. Thus it appears that the applied load is larger than theoretically required. In our example this is represented by area D on beam 3 which is included in area C even though the area is already considered in area B on beam 2. However, this simplification is safe from a structural engineer’s point of view.

LogiKal® analyses the serviceability limit state, i.e. the system’s deflections. This one is usually decisive for the design in practice because deflection limits are usually exceeded prior to stress limits. The load bearing capacity is not considered, i.e. neither an ultimate strength analysis nor a stability analysis like buckling or lateral torsional buckling are performed. Thus it is sufficient to multiply the applied loads by a partial safety factor of 1.0.

It is also possible to enter wind load profiles directly independent from national wind load standards. In order to do so the program enquires the wind pressure or wind suction values and the corresponding heights above ground. 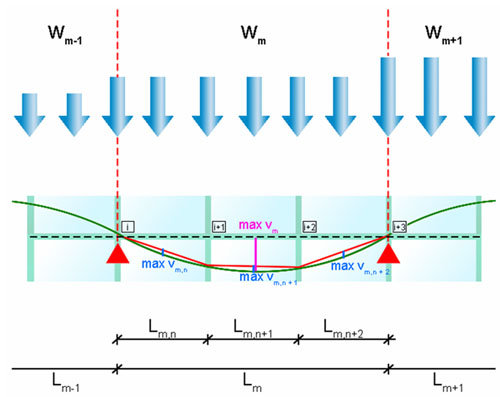 This is the beam’s deformation diagram due to the applied load. It is decisive for the design. Deflection limits are to be entered by the user. Those values usually depend on the designated glazing and thus they have to be requested at the glass manufacturer. Common limit values are 8mm or L/300.

Since the deflection is reciprocally proportional to the second moment of area (moment of inertia) LogiKal® is able to calculate the required Ix value and to decide whether the profile’s current Ix value is structurally sufficient or not.

The statics module splits the beam into individual spans measuring Lm which are located between two supports each. A constant distributed wind load wm acts on every span. A beam span might be split into individual glass spans Lm,n by transoms i.

Later it is displayed in the printouts which of the two parameters – beam span or glass span deflection – is decisive for the design.

Displays the run of the bending moment curve within a beam. Without having an influence on the calculated results non-rigid profile splices might be placed where the moment curve crosses the x-axis. It is also possible to calculate the existing stress within a beam by the moment diagram. However, stress is not applied to design the profile. For this the deflection curve is decisive exclusively.

Displays the run of the shear force curve within a beam. The x-intercepts of the shear diagram represent the places where the moment diagram shows a minimum or maximum.

Adding the shear forces acting right and left to the support results in the support force. It might be used to design e.g. anchors. But you should keep in mind that the calculated support reactions might have to be multiplied by a partial safety factor gF in design for strength.

Glasses are calculated as rectangular linear supported plates in compliance with the Kirchhoff plate theory. This states that the stresses within the midsurface equal to zero and that  transverse shear deformation is neglected.

As soon as glass deflections become larger than the glass pane thickness the so called membrane effect is activated significantly. From a structural point of view it is safe that the calculation method neglects this positive effect of geometrical nonlinearity.

Was this page helpful?
Yes No